What’s the differences in 3D cameras and how to choose the best one?

It is estimated that by the year of 2026, the 3D camera industry will climb up to the profit of $15.0B. The result is astonishing for manufacturing industry.

What is 3D camera?

Usually, when someone mentions camera, the first things that comes into mind is the camera used to capture photos in two-dimensional way. However, in some scenarios of certain industries, a two-dimensional output can’t meet the needs. That is why 3D camera is invented. A 3D camera not only can capture the 2D information, but also has 3D information required. Thus, the output of a 3D camera is usually in the combination of 3D point cloud and a 2D image which is crucial in certain demands.

The classification of 3D camera

With the development of new technologies, the family of 3D camera gets bigger and stronger constantly. Each genre of 3D camera has its own pros and cons. Commonly-adopted 3D cameras can be divided into 4 kinds:

All those professional and similar expressions may confuse you. Here, we’re gonna generally go through the basic and common 3D cameras in the market with an introduction of their principles, advantages and applications to help you understand the differences clearer. But first, please remember that they all share one common point that the ultimate purpose is similar: to gather 3D information of the tested objects. The differences lie in the area of how they achieve that goal and which one should you choose for your benefit.

How does 3D laser work: 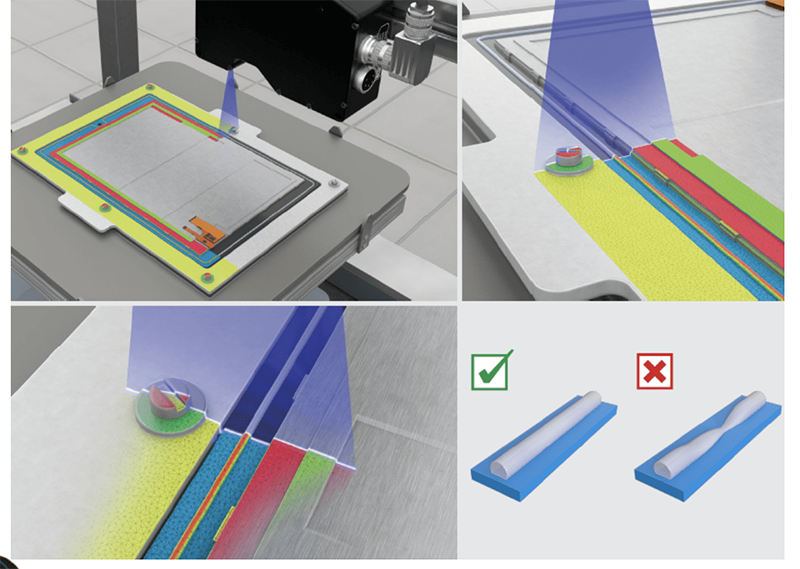 This kind of 3D camera adopts laser as its tool to detect objects. It projects laser from one end to the other end. A beam of laser is projected to the measured target at a certain incident angle, and the laser is reflected and scattered on the surface of the target. At another angle, the reflected laser is converged and imaged by a lens, and the spot is imaged at the CCD in the sensor. When the measured object moves along the laser direction, the position of faculae in the sensor will move, and its displacement corresponds to the moving distance of the measured object. Therefore, the distance between the measured object and the baseline can be calculated from the displacement distance of the faculae. Since the incident light and the reflected light form a triangle, the geometric triangle theorem is used for the calculation of the faculae displacement. That is why it’s called the principle of laser triangulation, which is widely used for measuring displacement, position and thickness of objects. 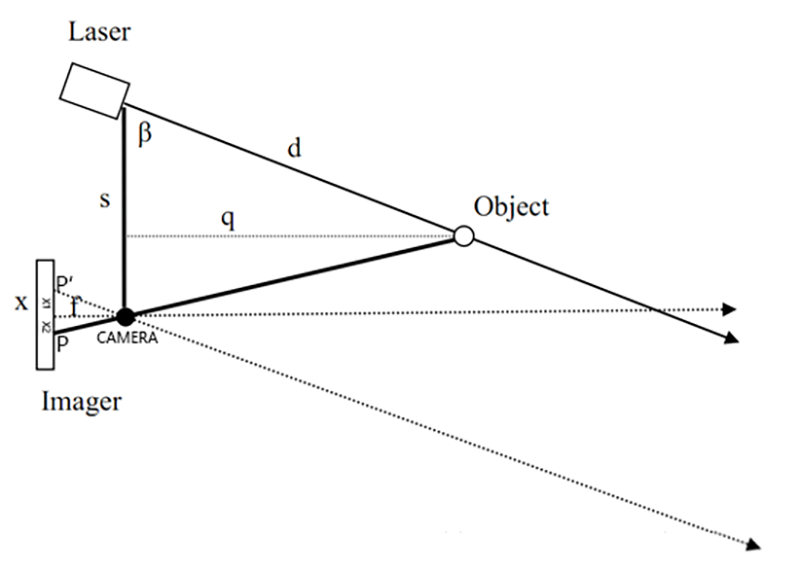 How does it work?

Have you wondered why it has a word “structured” in it? Because that’s what it does. This kind of camera adopts a principle which structures light. Main parts of a 3D structured light camera include camera and projector. A projector projects active structural information (i.e. laser fringe, gray code, sinusoidal fringe, etc.) to the surface of the measured object. Then, a single or multiple camera is used to take structural light images of the measured surface.  Finally, using depth information (point cloud data) generated by depth camera and RGB color image information, 3d scene can be restored based on the principle of triangulation. 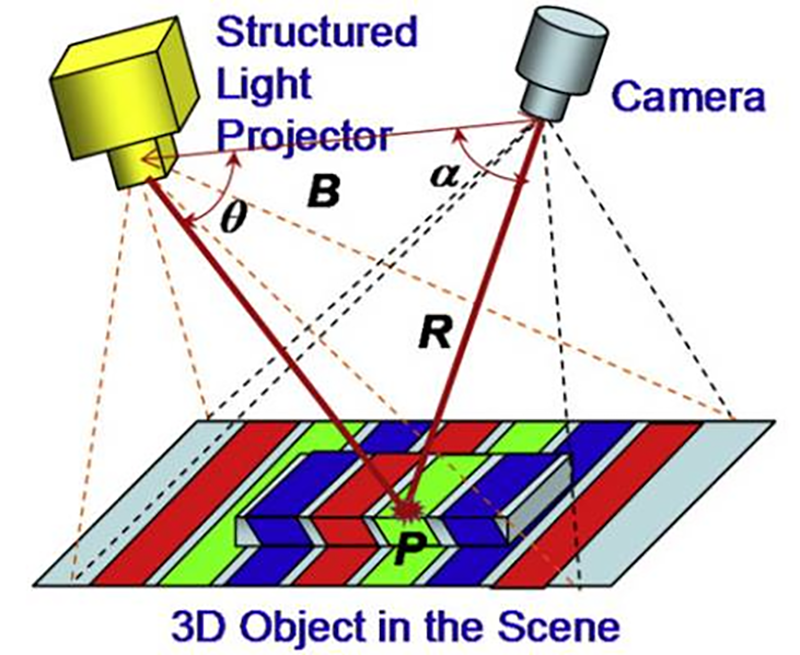 ToF (Time of Flight) camera adopts a different principle to gather 3D information, which is based on sensing the time of optical pulse in order to calculate the exact distance of objects. The detect distance can be up to dozens of meters with little disturb of environmental light. That is why it is commonly adopted in the field of self-driving and high-end Lidar. 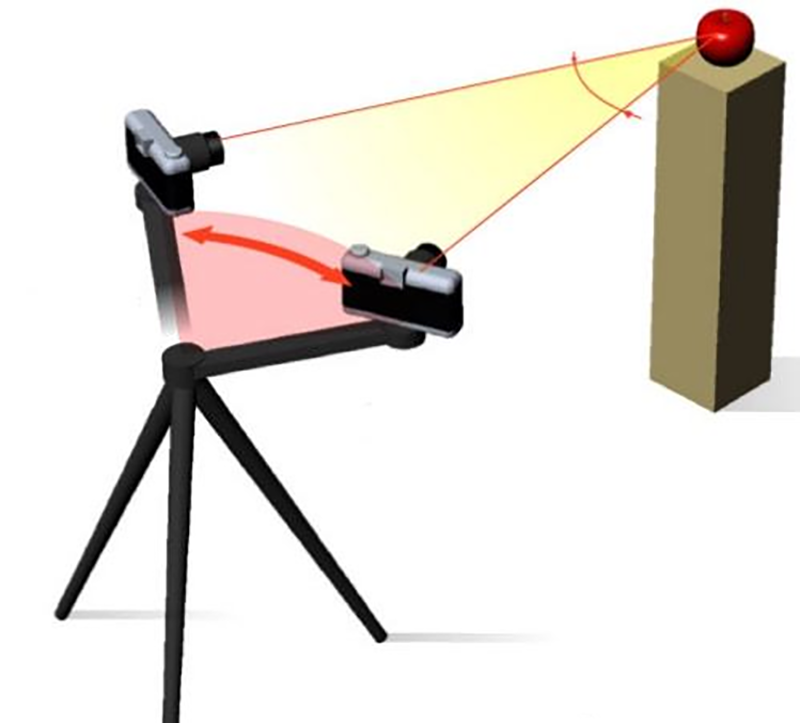 The principle of binocular stereo vision is similar to how human see in naked eyes. The camera acquires two images from different positions. Knowing the distance of two fixed cameras and the working distance, the 3D information can be calculated with the help of parallax principle.

The principles adopted between binocular stereo vision and 3D structured light camera is that while they share similar calculation mathematics, a 3D structured light camera projects one beam of laser and then absorbs the reflected laser. On the other hand, binocular stereo vision doesn’t have any part to complete the action. It simply takes two images, just like naked eyes of human to see things with two eyes and sense the distance. 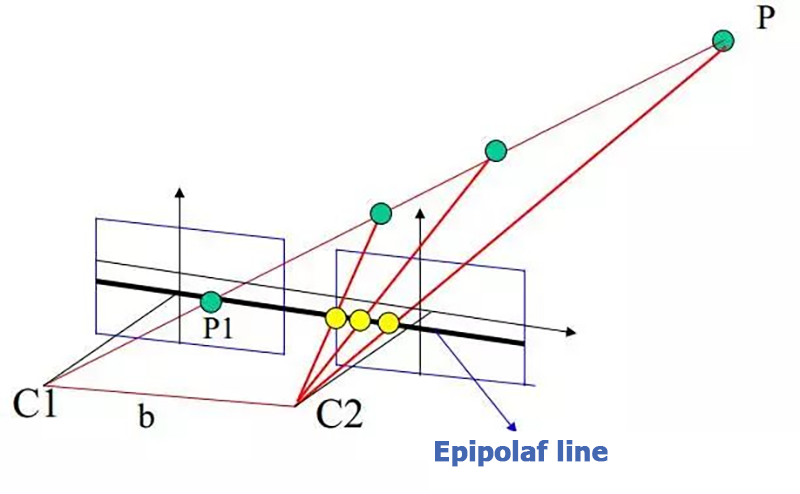 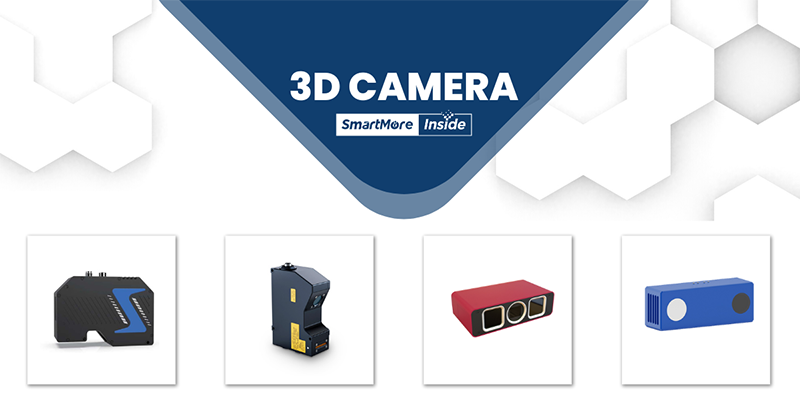 Even with all the differences and pros of common kinds of 3D camera, things may still differ in the various working environment. Professional assistance is still required. SmartMoreInside offers various kinds of 3D cameras and sales team to help. If you have any requirements, feel free to contact us! Here at SmartMoreInside, you can have one of the best purchase experience!