Among the abundant products of industrial cameras, the pearl on the crown is definitely 3D camera. It can detect materials and feed back results which naked eyes can’t see. But have you wondered the difference among all these 3D cameras and which one is the right one for you?

What is 3D camera

Today, many 3D cameras use structured light technology. This technique also uses triangulation, but works by projecting patterns of light onto the object to be scanned rather than laser lines (or points). Use an LCD projector or other stable light source to project the pattern onto the object. One or more sensors (or cameras), slightly offset from the projector, look at the pattern shape of the light and calculate the distance to each point in the field of view. The structured light used in the scanning process can be white or blue, and the pattern of light usually consists of a series of stripes, but can also consist of a matrix of points or other shapes.

The advantage of structured light technology is its fast scanning speed. The scan can be completed in about 2 seconds, and the scan area is also large. Just like laser scanners, structured light scanners are very accurate and have high resolution.

One of the drawbacks of structured light cameras is that they are sensitive to lighting conditions in a given environment. For the laser camera, it can be a good job. Lasers can direct bright light over a narrow range of wavelengths, so they work best in almost any environment. At close range, it also works with highly transparent and reflective objects such as glass. On the whole, the laser camera will be better in application scenarios and robustness.

If you want to know more information about 3D structured camera, here’s a more detailed blog to further illustrate. 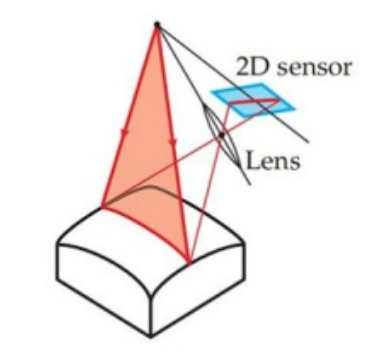 The laser camera is based on triangulation and can accurately capture 3D shapes (millions of points). More precisely, they work by projecting a laser point, or laser line, onto an object and then using sensors to capture its reflection. Since the position of the sensor and the distance from the laser source are known, accurate point measurements can be made by calculating the reflection Angle of the laser. With the knowledge of the scanner's distance to the object, the scanning hardware can map the surface of the object and thus record the 3D scan.

This method is called triangulation because the laser point (or line), sensor and laser emitter form a triangle, as shown below. There are many different types of laser scanners on the market and you can choose between handheld devices, desktop devices or professional/industrial devices. The point is that they can work over short distances. Lasers also have the powerful advantage of directing bright light over a narrow wavelength range, so they work well and stably in almost any environment.

Difference of two types of cameras

Here at SmartMoreInside, we guarantee the perfect products of both 3D laser camera and 3D structured camera. With a professional team for guidance, you can surely figure out the right camera for your business.